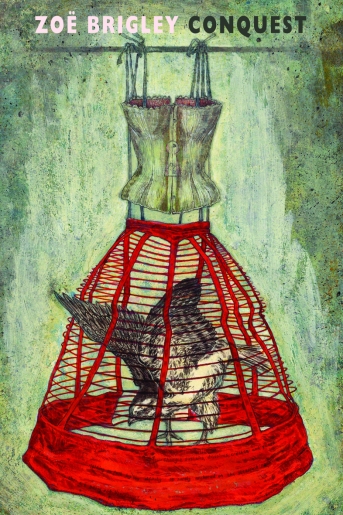 The Little Cage of Ellis Bell

This project presents the work of British artists Victoria Brookland (art) and Zoë Brigley Thompson (poetry), alongside historic garments from the Ohio State Historic Costumes and Textiles Collection. In juxtaposition, the paintings, poems, and objects explore how women’s sexuality has been expressed and repressed in past eras.

Zoë and Victoria met when they were both artists in residence at the home of the famous nineteenth century novelists, the Bronte sisters. Both were inspired by the intriguing objects that the sisters left behind: a perfume bottle that belonged to their mother; dresses they wore in celebration or mourning; and the tiny books where they wrote stories in minute, scratchy handwriting.

This new exhibition is named after Ellis Bell (E.B.), the pseudonym one of the sisters, Emily Brontë. Her Wuthering Heights was originally presented as written by a man. Eventually, her identity was revealed, and she was ever after portrayed as a rebellious, wild, even cruel spirit.

In Victoria Brookland’s image, The Little Cage of Ellis Bell, a crow breaking out of a crinoline represents Emily Brontë’s conundrum. Emily wrote her work under the male pseudonym Ellis Bell, but is this an act of power, or in disavowing her womanhood, is she playing into the hands of a male-dominated writing industry?

Eminent Victorian critic Isobel Armstrong has written that, although the nineteenth century was a time of many proscriptions for women, it was also a moment when women were beginning to enter public spaces, and make their voices heard, especially in literature. Exploring these complexities, Zoë Brigley Thompson’s poetry and Victoria Brookland’s art appear along with real fashionable items like corsets and dresses from OSU’s Historic Costume and Textile Collection.

This event is to mark the reception of ‘The Little Cage of Ellis Bell,’ an exhibition of Victoria Brookland’s art, Zoe Brigley Thompson’s poems, and objects from the archives at the Ohio State Historic Costume and Textiles Collection,

There will be a poetry reading by writers inspired by the Historic Costume and Textiles Collection.

There will also be a short reading by Zoe Brigley Thompson, whose poems feature in the exhibition.